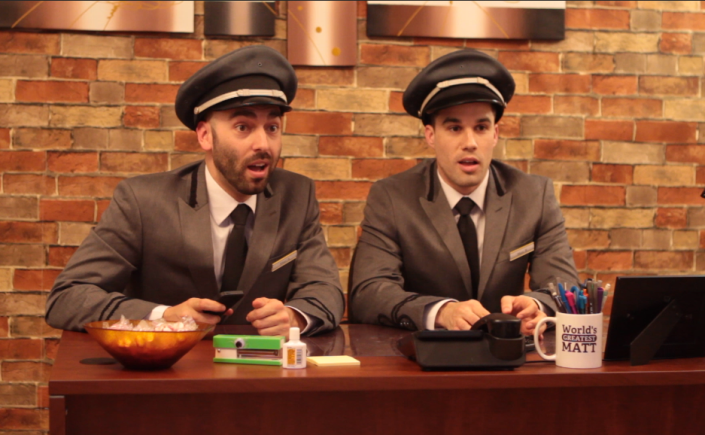 I can’t tell you how excited I am to reveal this.  It feels like I’ve been working on this FOREVER!

Doormen. The Award-Winning Webseries. has a release date!

Watch the Doormen. The Award-Winning Webseries. Award-Winning Trailer below and if you’re in Manhattan, join us for the live premiere party on Dec. 16th! Facebook Event here!

Doormen. The Award-Winning Webseries is completely done filming! Peter and I are so unbelievably grateful for everyone’s support we wanted to share a little bit with you all. So here’s a quick sneak peak of some of our favorite moments so far…

To all of our Kickstarter Donors. Thank You. We couldn’t have done it without you all. You guys are the real heroes.

Since Peter (my comrade in arms over at PJ Party Comedy) and I are self-producing* Doormen. The Award-Winning Webseries.

*Actually it’s not exactly, entirely self produced. The majority of the funding we have for Doormen came through an unbelievably generous group of supporters on Kickstarter, all of whom we are profoundly thankful for. See HERE.

But since our funds are limited and we are self-producing along with the help of many generous kickstarter backers, Peter and I have found ourselves in the position of asking this question a LOT.

“HOW MUCH DOES THIS JOKE COST?”

Actually tangibly how much does each joke cost. Financially.

With an actual dollar amount.

Most recently we found ourselves in this position. With the space that we’re using for Doormen. The Award-Winning Webseries. We needed to purchase a “front desk” that the Doormen would either sit or stand behind. But since there are two Doormen, and the thing about them is that they are exactly the same, (including having the same first name, “Matt”), if they were going to sit behind the front desk, we were going to have to purchase a chair that looks nice enough that it could conceivably be a chair that would be found in a fancy lobby, and we’d have to buy TWO of them.

So we thought about just not having them have chairs.  Maybe be at a standing desk.  But then we realized in one of the episodes we reference them sitting. And more specifically we reference for a joke the chairs they are sitting in.

MATT A: Are you in my FourSquare… square…? Is that… um, what do you do on FourSquare?

MATT A: Oh yeah! Become mayor. Are you mayor of anything on FourSquare?

MATT B: (indicates chair he’s sitting on) This chair.

MATT A: (indicates chair he’s sitting on) This chair!

MATT A AND MATT B: Chair Mayors! NICE!

Which brings us to the point that if we cut the chairs. We’d have to cut that joke. Because honestly at no other point in the webseries do we reference them sitting, or chairs or anything like that.  So basically that one joke costs us 2 chairs. Literally.  or more matter-of-factly, $110.00  The chairs we are looking at are $55 each, so that’s $110 for chairs that are not technically needed for any other point in the webseries. We can obviously use them if we have them. But the only reason we would have to have them is for that specific joke that now has an actual price of $110.

I’m going to say that again because it’s just as surprising to me. Keeping that specific joke in the webseries will cost me $110.00.

Should we keep it in?

Should they me mayors of something else? Perhaps Hair Mayors?

And catch the release of Doormen. The Award-Winning Webseries. this Fall and find out of this joke made the cut…

Haven’t tweeted or posted in 6months, and this is the joke I come back with. You’re welcome.
My Tweets